“Sometimes I have to concede: you actually can write a good song without words.”


Tracklisting
Reviews
About My Two Toms


My Two Toms formed in Newport in 2001 and moved to Bristol in 2002. One of them is called Cops, the other one Stubbs. They play instrumental songs on banjo, guitar, ukulele and xylophone.

Field Recordings and Two is their first two albums, originally self-released on CDR, now re-released as one cd, compiled like a jam sandwich with a bonus live track as the filling.

If you’re a fan of Bonnie Prince Billy, the ‘O Brother…’ soundtrack, The Anthology of American Folk Music, Richard Thompson or John Fahey, then this is for you.

“The melodies are direct, memorable, and inseparable from the interlocking harmonies that are weaved around them. My Two Toms carries the traditions of the most memorable music; the complexity found deep within the drone of the Appalachian Mountains, the spiraling melodies of Northumberland pipe tunes, a simple song that stands well the test of time and is remembered not in a crazy-making way but as an old friend.”
– Charlie Parr, April 2006 (from the liner notes)

“It hurt right, like, you know, in the heart, where it's at, it spoke to me, straight, you know? and I was there, I was a My Two Toms fan. So, I bought their album after the show, wished they had it spinning 78RPM, it would have fitted their style. And then, well, I still have it, still listen to it, and I’m glad someone’s re-releasing it. I’ll buy it again, I’ll put it on for someone, a good friend and I’ll go: “Hey! You gotta listen to this, man, listen to this tune, man, it’s awesome!” or something like that!”
- David-Ivar Herman Dune, March 2006 (from the liner notes)

Reviews for 'Field Recordings' and 'Two'

"I've never heard of MY TWO TOMS before. Not unless I can count my two twin brothers called Tom..... Am laugh a minute me.... You know how we like to straddle genres like the musical whores we are. This week we're championing some nice old sounding Americana.. This is a comp of 2 x CDR's that the band self released ages ago... they're long out of print and thankfully Mole In The Ground have wanged 'em out together on one lovely 22 track disc. It's all instrumental songs utilising banjo, ukelele, guitar and xylophone. It sounds incredibly authentic, well thought out and constructed and if that wasn't enough it's all tremendous fun. If you're into John Fahey, Charlie Parr, Will Oldham's Ode Music and the Roscoe Holcomb LP that Bo Weavil brought out you'll be wanting this. Absolutely brilliant."
- Phil 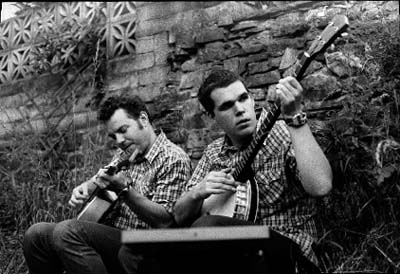 My Two Toms are Tom Cops and Tom Stubbs. The duo formed in 2001 after they met on a film shoot in Newport, South Wales. Cops was taking the stills, and Stubbs was recording the sound. They annoyed the rest of the crew by playing banjo during the coffee breaks.

Within two weeks they were asked to play a show at the legendary TJ’s in Newport, so they hastily had to write some material. They continued this quick practical approach by recording their first album later that summer.

The album was recorded in one day, from the back of a van, using a mini disk and a small stereo microphone. “Field Recordings” was released on CDR through Slumber Party, and by February 2002, John Peel had played four tracks.

Both Toms relocated to Bristol in 2002 and became a regular on the Bristol music scene. They released their second album “Two” in 2003.

When My Two Toms write music, they often use broken instruments and allow the remaining strings to dictate the structure and melody. They have a deceptive simplicity that can sometimes trigger images of rural landscapes. Their music is as familiar as an old children’s TV programme. It is also often driving and hints at folk and American country, with a very English slant.

They are also one half of The Lonely Ponies, the other half being made up of the dynamic punk duo Bucky.

Further details and a full history of the band appear on the My Two Toms website at www.mytwotoms.co.uk.